skip to main | skip to sidebar

There is a conversation that goes on in our head between the time the alarm goes off and the time we press the snooze button.  It is a very short moment but, a lot is said in that span of time.  There is a fight going on between the part of you that needs to get up and go off to wherever you need to go to and the part of you that luxuriates in sleep and wants to enjoy a few more dreams.  I experienced that internal conflict the other morning.

I have started training in a form of yoga called Ashtanga (commonly known as power yoga).  It is a very disciplined form of yoga with a half dozen lengthy series of postures to aspire to.  I am currently struggling with the very first series.  After staying up late engrossed in a work project, I did not want to get up early to head across town for my yoga practice. Every muscle in my body was tired and sore - and I don't normally get sore - so my body was in some form of shock and denial :).  I pressed the snooze button, I got up and stopped for a short nap on the plush carpeted floor, I crawled back in bed after setting the alarm for seven more minutes - as if that was going to help any - and the madness continued for a half hour.  Finally, when the do or die moment arrived - that if I didn't get dressed and jump in the car within the next three minutes I would be too late - some mysterious force took over my body and I was called to action.  I did make it to the class on time, I did remember the whole series, I did huff and puff and struggle with the poses and lose a tremendous amount of water through my pores and - I did feel a great sense of accomplishment and a knowing that I had made the right decision to go, as hard as it was to convince my tired body.

I remember when the kids were young, we planned a trip a few hours west to an incredibly fun water park call Schlitterbahn in the town of New Braunfels.  There is also the river to float lazily down in your inner tube with your beer cooler (or other appropriate refreshments) alongside your partying group.  The kids did not want to go.  It was too far away. But we took them anyway (letting them bring a friend to ease the pain of the long drive).  It didn't take them long to figure out that this was one of the coolest places  on earth and they didn't want to go home - ever!

I don't want to go!
YES you do!!
Try it - you just might surprise yourself and like it.
Posted by Nutmeg at Monday, September 24, 2012 No comments:

It Never Hurts to Ask

I was seated at the dining table at a business dinner meeting.  The table was crowded with plates and silverware, a view obstructing centerpiece, coffee mugs and an assortment of drinking glasses.  In front of each place setting was a scrumptious looking dessert.  The desserts alternated with divine chocolate cake at one setting and a traditional cheesecake at the next seat. Unfortunately for the chocolate lover in me, I ended up seated with cheesecake in front of me - all the while eyeing the chocolate cake my tablemate was about to devour. I flagged down a waiter and asked if there was a possibility of getting the chocolate cake instead.  He disappeared from the dining area and appeared a few short minutes later with chocolate cake in his hand.  He proudly delivered it straight to my waiting fork.  Other ladies at the table and surrounding tables with uneaten cheesecake sitting in front of them, carefully watched every move of the waiter as he delivered the slice of chocolate heaven to my table.  "How did you get that?", some inquired.  "I just asked the waiter", I replied and told them they could too.  You can get whatever you want in a hotel.  And they did.  Soon every woman around me and several men were eating chocolate cake with devilish grins on their faces.

I must confess I read a "trashy" novel at the beginning of the summer.  It was actually a trilogy.  My friends anxiously awaited their turn to borrow my books.  The book binding wasn't of the highest quality and it wasn't long before pages and 1/2 inch thick chunks of pages started to fall out of the cover.  I wrote to the publisher regarding the binding.  They called me after receiving my letter and said they would be sending me replacements for all of the books.

It never hurts to ask.

I waited outside the group exercise room for the class before us to finish so we could begin our yoga session.  I was subbing the class for another instructor.  One lady, that I have known for years since "Reebok Step" was a popular workout format, saw me and declared that she was leaving.   "You are NOT leaving", I retorted.  "Oh - yes I am.  You are too hard", she replied. I repeated that she was NOT to leave.  I went to the back room to turn out the lights and when I returned she was still there. She stayed.  I modified the class to fit the yoga level of the attendees.  My lady that was going to leave thoroughly enjoyed the class and thanked me vehemently as she left.  "I just listened to what you were really asking for and gave it to you.  Thank you for letting me know".

It never hurts to ask.
Posted by Nutmeg at Sunday, September 23, 2012 No comments: 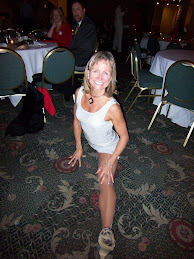